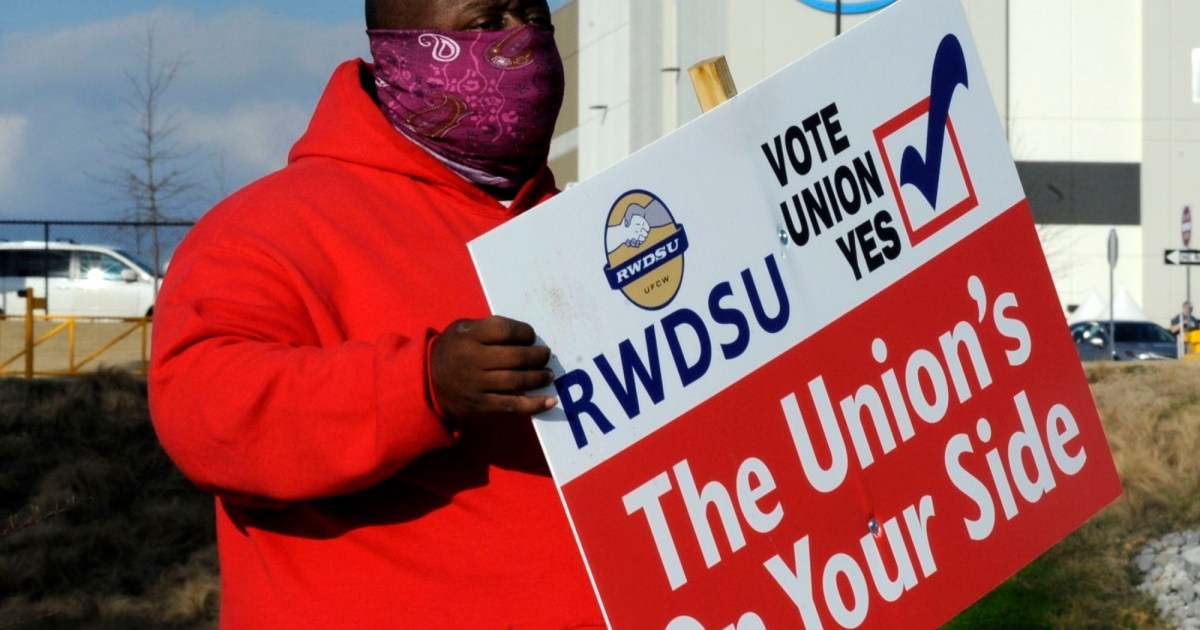 Birmingham, Alabama, the United States – On a recent Monday afternoon, several Amazon workers and local allies showed up to draw attention to the ongoing fight over whether to unionise the online retail giant’s fulfilment centre in Bessemer, a town of about 27,000 people. Taking over the parking lot of the Unity CME Church, workers gave speeches in between chants and calls urging Amazon to treat its employees better.

“I am ready to fight. I am tired. I want everyone to hear me, we’re in this together,” said Linda Burns, an Amazon worker who shared her experience of being reprimanded by a supervisor for taking too long during a bathroom break.

Burns is one of a small but growing number of Amazon workers who are publicly calling for a union at the Bessemer warehouse. With just a few days until the vote closes on March 29, the majority of the more than 5,800 workers at the site still haven’t cast their ballots.

As Burns addressed the small crowd on March 22, a crowd of TV news cameras trained their lenses on her, underscoring just how much attention the typically quiet Birmingham suburb has attracted in the last few weeks. If the pro-union campaign prevails, Bessemer will become the first unionised Amazon facility in the US (Amazon has several unionised facilities overseas).

Driving back to his office a day after the rally in the church parking lot, Josh Brewer, the campaign’s lead organiser, comments on the number of media calls that he has fielded in recent weeks. It’s a far cry from the start of the vote in early February, when sporadic national reporting was largely done remotely out of Washington, DC and Seattle, where Amazon is headquartered.

Brewer, who is a member of the Retail, Wholesale and Department Store Union (RWDSU), a national labour union with more than 60,000 members across the US, said that in addition to local and national media outlets, at least 25 international networks have sent at least one crew each. As he finished saying this, he glanced down to see an Australian network was calling him.

As he pulled into the RWDSU office parking lot, Brewer pointed out the barbecue restaurant, Jim ‘N Nick’s, where he and his colleagues frequently have lunch.

“At one point, I had a drone in front of me and behind me,” Brewer said.

While the media attention has reached the point where Brewer now has to prioritise pro-union workers’ limited time, he and others hope the global attention will encourage hesitant workers to vote yes to the union — in Alabama and elsewhere.

The RWDSU has previously said more than 1,000 Amazon workers across the country have sought the organisation out “seeking information about unionising their workplaces”.

For its part, Amazon said it offers a comprehensive benefits package across the board for its US workers, including healthcare coverage, parental leave and 401(k) matches — benefits that many other American workplaces don’t offer to hourly wage workers.

With a starting wage of at least $15 per hour, Amazon also pays more than twice the federal minimum wage. (Alabama has no state minimum wage.) Indeed, when the Bessemer location opened last March, coinciding with the beginning of the coronavirus pandemic, it was seen as a much-needed boost to the local economy.

But many local workers have pointed to other nearby box chains where unionised workers make more – and have said that working for Amazon is far more gruelling. They complain about the intense surveillance, the limited breaks and the sheer wear and tear on their bodies.

Many of these complaints about how Amazon treats its workers are not new. Workers having to urinate in bottles has now become part of American folklore (although the company denies the claim), and the company has an alarmingly high number of workers who have either been seriously injured or even killed on the job, according to leaked documents revealed by The Center for Investigative Reporting.

As Alabama is still in the middle of a pandemic, many workers would like to see the additional $2 per hour in hazard pay reinstated — a benefit that was added for “essential workers” earlier in the pandemic but was taken away in June, despite Amazon raking in record profits this past year largely because of the pandemic.

Then there’s the issue of “time off task” or TOT. Workers in Bessemer say they’re only allotted so much time each day to go to the bathroom, take a water break and grab something to eat.

According to workers, these breaks are rigorously patrolled and any extra seconds “off task” are tallied and recorded. Once an employee has spent too many minutes off task, workers say they are automatically dismissed, underscoring incredibly high turnover rates for the company across the country. (In some places, Amazon facility turnover rates are as high as 89 to 107 percent, according to a March 2020 report by the National Employment Law Project.)

The facility is so big that workers often compare it to Buckingham Palace, leading to anxiety over whether or not they will have enough time to walk to a bathroom or water dispenser — and whether there will be a line or any cups available when they get there.

That TOT can add up especially quickly if workers miss early start times.

Darryl Richardson, a “picker” who is responsible for first reaching out to RWDSU, said he experienced at least one incident in which his manager changed his shift last minute and alerted him through an internal company app overnight — something that he and others say is common.

In an emailed statement to Al Jazeera, Amazon spokesperson Heather Knox said that “more than 90 percent of associates at our Bessemer site say they would recommend Amazon as a good place to work to their friends”.

In response to workers’ grievances about breaks, Knox confirmed that workers get two 30-minute breaks during the 10-hour shifts, noting that employees “work four days on, three days off,” and that the Bessemer fulfilment centre has more than 15 breakrooms on site and multiple bathrooms on each floor.

“Employees can also take short breaks at any time to use the restroom, grab water or a snack, or speak to their coworkers, manager or other support staff, such as HR, all of which are paid breaks,” the statement read.

And while Amazon doesn’t “believe the RWDSU represents the majority of our employees’ views,” the statement added, it respects “our employees’ right to join, form, or not to join a labor union or other lawful organization of their own selection, without fear of reprisal, intimidation, or harassment”.

With just a few days to go before the deadline, both sides are still trying to make their case. According to pro-union organisers, they are making several hundred calls a day, hoping to swing undecided voters.

According to workers, Amazon is still sending out several daily anti-union phone messages, pushing the message that if workers unionise, they may lose their benefits. (Some workers also expressed concern over an on-site United States Postal Service mailbox that was installed after voting began and is in direct eyesight of several company surveillance cameras.)

In terms of results predictions, former University of Alabama labour law professor Harry Hopkins thinks there is a “slim chance” that the union drive will be successful. In an email, he told Al Jazeera it is “extremely difficult” to organise a unit as big as Bessemer’s.

But Joshua Freeman, professor emeritus of labour history at Queens College at the City University of New York, said there’s no way to predict the outcome until the results come in.

“If I was a betting man, I would decline this bet entirely,” Freeman told Al Jazeera. “Most of the high-profile, large union elections in the South in recent decades have failed. But, you know, this is a different industry than most of those elections have been involved in. And some have won.”

One big thing that RWDSU has in its favour is that many older workers — especially those who have previously belonged to a union — have been very vocal in their support for this union.

As for what happens if the union drive is successful, Freeman said the beginning-to-end process is “enormously elaborate”.

“If the majority of the workers are for the union, the companies are obliged to engage in what we call good-faith negotiations, but it’s not obliged to sign a contract, and a very large percentage of situations like this where the workers do win the votes, they never get a first contract,” Freeman said.

In that case, continued global news coverage could play a role in Amazon taking the union more seriously — especially, as Freeman said, if it cares about protecting its public image. 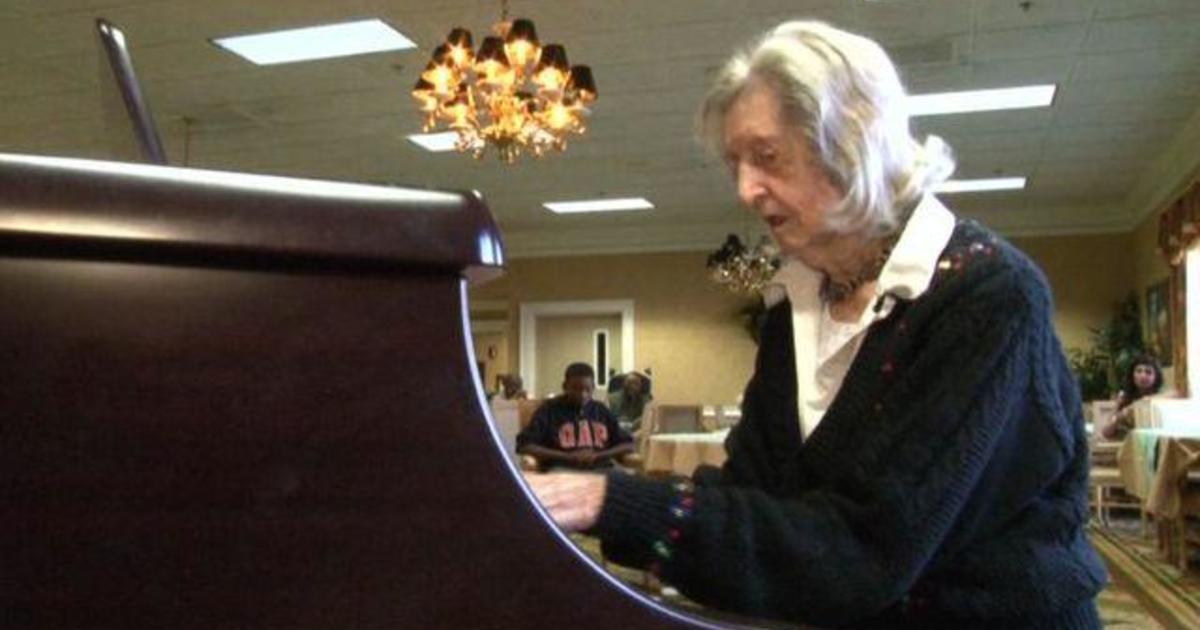 Third concerning coronavirus variant should be a ‘wake up call’ to the world, experts warn 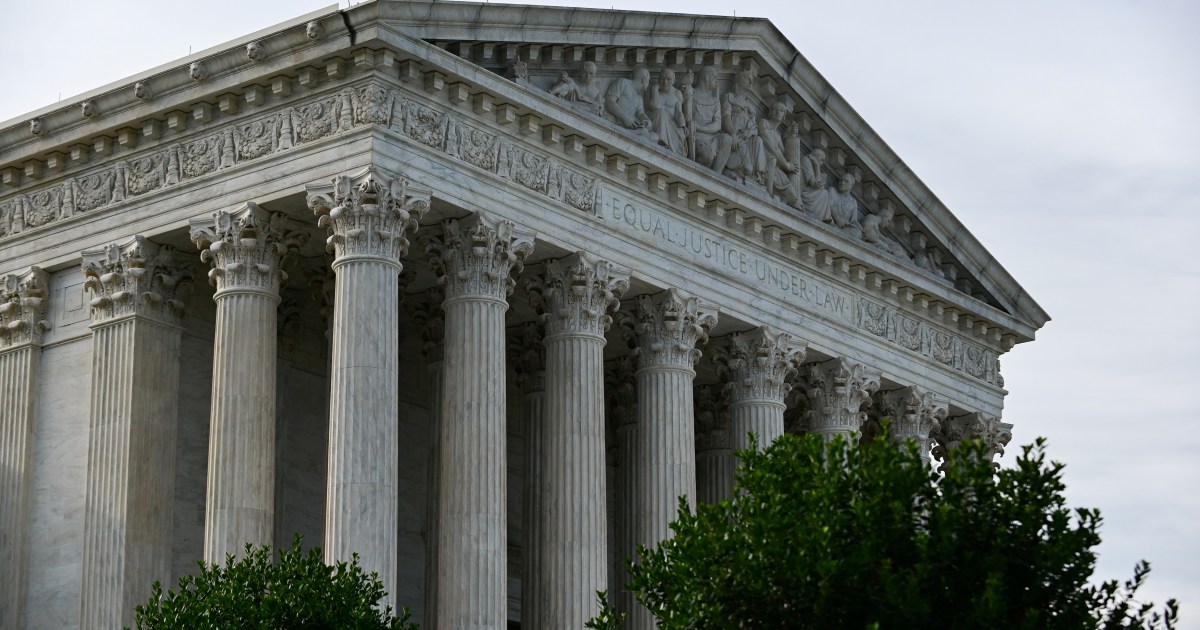 US Supreme Court rules against residency for some migrants