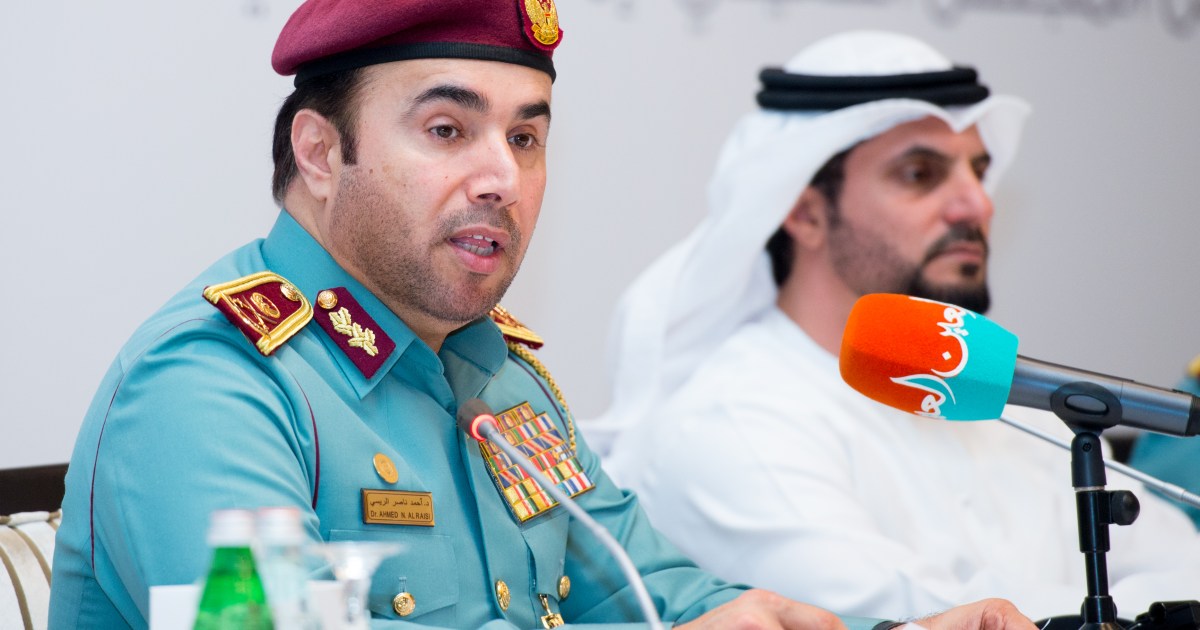 Complaint by Lebanon-based NGO accuses Ahmed al-Raisi, a candidate for president of Interpol, of playing role in torture of jailed activist Ahmed Mansoor.

An NGO campaigning for human rights in the Gulf has filed a complaint in France against a top UAE official running to be president of Interpol, accusing him of being responsible for the torture of a prominent dissident, its lawyer said on Friday.

The Lebanon-based Gulf Centre for Human Rights (GCHR) filed its complaint against Major General Ahmed al-Raisi, inspector general at the UAE interior ministry, at a Paris court on Monday.

The complaint accuses al-Raisi, who is a member of Interpol’s executive committee, of being responsible for “torture and barbaric acts” against the prominent UAE dissident Ahmed Mansoor who it says is being held in an Abu Dhabi jail in “mediaeval conditions”.

Mansoor was arrested in 2017 and sentenced to 10 years in prison the following year on charges of criticising the UAE authorities and tarnishing the image of the country on social media.

Amnesty International describes Mansoor as a prisoner of conscience.

According to the complaint, he has since March 2017 been held in solitary confinement in Al-Sadr prison in a tiny cell “without access to a doctor, hygiene, water and sanitary facilities”.

Al-Raisi was accused last year of being responsible for the torture of a British academic and a football fan.

He is regarded as a possible figure to become president of the France-based global police body, Interpol, when candidacies are presented at its general meeting in November, a prospect that has horrified activists.

In a joint statement last month, Human Rights Watch and the GCHR warned that his candidacy “may jeopardise the global police organisation’s commitment to its human rights obligations”.

Mansoor “has been detained in inhumane conditions since 2017, more than four years,” William Bourdon, lawyer for GCHR, told AFP.

“What can only be qualified as acts of torture must today be firmly denounced and condemned by the courts.”

He said an “imminent visit” of al-Raisi to France as “part of his (Interpol) campaign” could make prosecution in France possible on the basis of universal jurisdiction.

French judicial authorities can in theory judge crimes against humanity, war crimes and torture under universal jurisdiction if suspects are on French territory, regardless of where the crimes took place.

According to the complaint, al-Raisi’s role in the alleged torture of Mansoor is “established” due to his position which puts him in control of the UAE security forces.

An Interpol spokesman told AFP that candidacies for president would only be presented when the general assembly takes place but there was no obligation for hopefuls to come to France to make their case.

Contacted by AFP, the UAE embassy in Paris said its staff were not authorised to speak to the press.